An Unjust Situation: Why Can't Our Patients Receive Federal Extended Medical Coverage for their Acupuncture Treatments in BC?

In the spirit of helping our helping profession, I would like to update you and elicit your support in the campaign I launched last year (2018), aiming to address the current lack of medical insurance coverage for federal employees wishing to receive treatments from registered acupuncturists in BC. As the correspondence below illustrates, the present situation reflects an unfair bias against registered acupuncturists – whose services are not covered under extended health plans (SunLife of Canada), while acupuncture provided by certain other professions (i.e. not acupuncturists) is covered. I would like to thank ATCMA President Jason Tutt and editor Cheryl Coull, RAc, for their assistance and encouragement in my search for clarity in this important matter.

Please read my letter to Randall Garrison, my MP in Esquimalt-Saanich-Sooke. The same letter was sent to HH Minister of Health. It is my hope that you will be inspired to join me in my effort to educate our government and the public about the many challenges we face in performing our important work in good faith.
In addition to the issue of insurance coverage, for example, is the recent challenge to the use of moxibustion in our profession: https://www.easterncurrents.ca/for-practitioners/practitioners'-news/eastern-currents-news/2019/06/28/practitioner-appeal-moxa-on-the-rocks).

Federal Campain:Letter to the Minister of Health and all MPs in my riding: Esquimalt-Sanich-Sook below, all same format:

My name is Katrine Hegillman and I have been a practicing Doctor of TCM for nearly 20 years. I received my doctorate from the International College of Traditional Chinese Medicine in Vancouver and fulfilled my practicum requirements at the AnHui Hospital, He Fei, PRC. I have subsequently received teachings from well-regarded Practitioners worldwide, countless hours of professional development training in acupuncture and a range of related complementary medical practices.

This letter regards a matter of long-standing concern among my many patients and colleagues in the acupuncture profession.

Several of my patients employed by the BC Provincial Government receive at least partial insurance coverage for my services through provincial extended medical plans, other patients that receive coverage are on private plans. Meanwhile, however, employees of the federal government (with federal Sun Life insurance plans) are not eligible for any coverage for my services. (Ref 7)

The existing policy states that acupuncture treatments will receive coverage only if they are performed by a medical doctor, not by a Doctor of TCM or a Registered Acupuncturist (R.Ac.), regulated by the CTCMA (College of Traditional Chinese Medicine Practitioners and Acupuncturists of British Columbia).

I contacted Sun Life and was informed it is not their policy to exclude CTCMA registrants; this policy has been put in place by the federal government for its recipients of extended health coverage.

I am surprised and dismayed to hear that the outdated policies we acupuncturists have been contending with are coming from the federal government. It turns out federal government acknowledgement of our status lags behind the provinces of BC, Ontario, Alberta, Manitoba, and Quebec, where acupuncture is recognized and regulated.

I live and work in Esquimalt near the Canadian forces naval base and offices of the federal government, yet this current policy prevents me from fully serving my community and earning a living on equal footing with other healthcare practitioners.

More broadly, this policy discriminates against a cohort of practitioner’s province-wide who have dedicated themselves to years of acupuncture study in accredited schools at great cost; who have established businesses in a professional manner, paid their fees, insurance premiums, taxes and student loans; and who have abide by the strict regulations of their governing body, the CTCMA.

Of much greater concern, however, is the impact of this policy on the general public, who may be misled into believing that physicians, physiotherapists, nurses, and midwives, after a minimal few hours of training in acupuncture, are more qualified to perform acupuncture than those who have completed the rigorous and comprehensive programs developed by accredited institutions.  As my references below show, the above-mentioned practitioners of western-style medicine receive an average of 200 hours of training in acupuncture, (ref2), while a Doctor of TCM receives approximately 4,000 hours of training.

We struggle to offer our patients treatment because our “acupuncture” is not covered by insurance, while the “acupuncture” that has been integrated into the scope of practice for physiotherapists, medical doctors, naturopathic doctors, nurses and midwives is covered.

Acupuncture has developed over centuries and around the world as part of a complex and coherent system of medicine – one that both independently, and in conjunction with modern western medicine, addresses many diseases and disorders endemic in our western society. (Notably, for example, in the midst of the current opioid crisis, acupuncture stands out for its treatment of chronic pain). Practitioners who use the tools of acupuncture without any understanding of acupuncture theory and without thorough and appropriate training in its methods, run the risk of harming patients. Also, in the process of harming patients, or at the very least, by providing what is too often ineffective treatment, they are damaging acupuncture's reputation.

In addition to being effective medicine, acupuncture is cost effective, which is also a very good reason why it should be included among patients' insurance options: acupuncture treatments are relatively inexpensive; they reduce the need for far more expensive therapies, medications, hospital visits, and surgical interventions. (Please see references supporting this, below, from WHO, NIH USA, and independent researchers).

In modern hospitals worldwide, it is increasingly common to find acupuncturists working alongside physicians (ref 6). Insurance coverage for acupuncture treatment is available to patients in a growing number of jurisdictions nationally and internationally. British Columbia, however, is falling farther behind in terms of being able to provide the best possible, least invasive, and most affordable care for its citizens.

I am grateful for your urgent attention to this matter: many patients and practitioners have been waiting a long time. 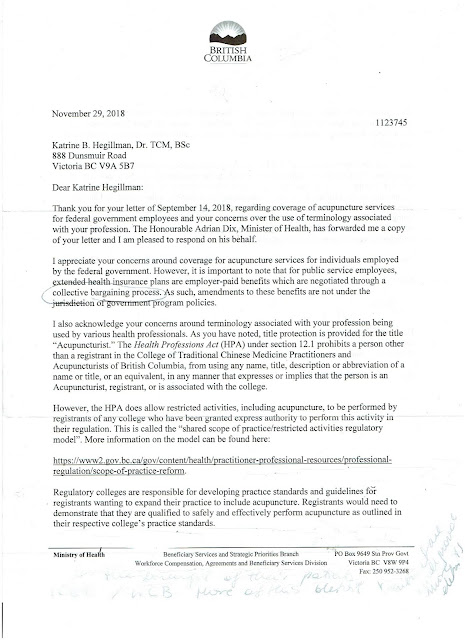 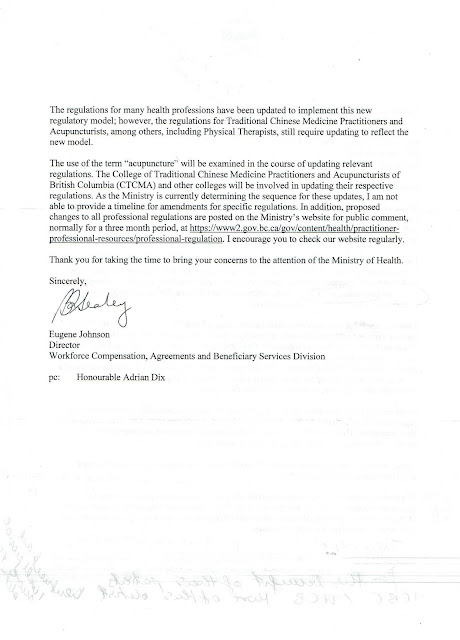 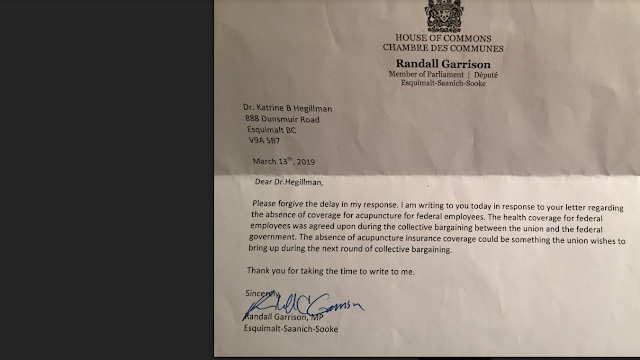 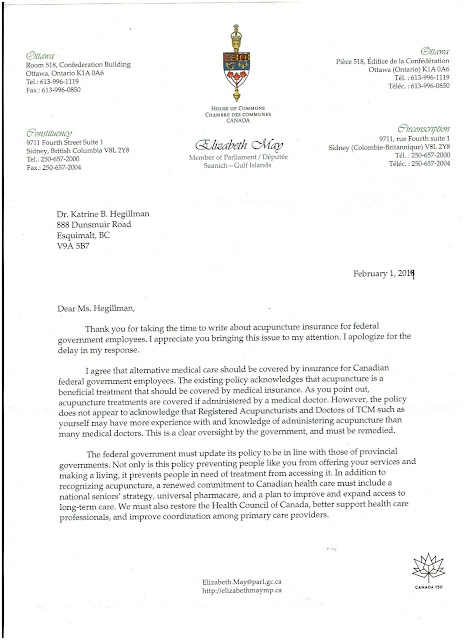 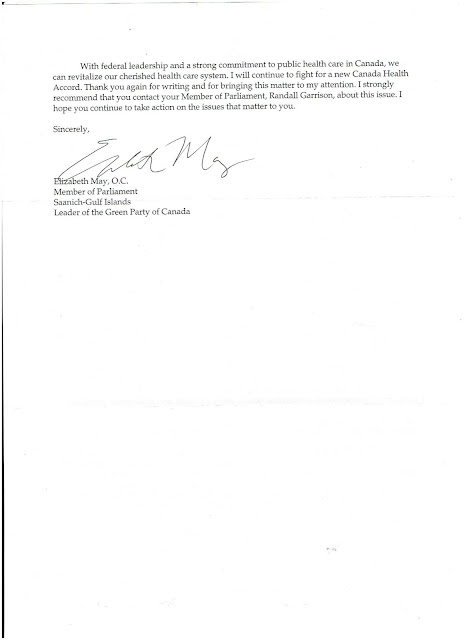 Bellow my next letter to the involved party (edited by Cheryl Coull, big thanks!)

My name is Katrine B. Hegillman, Doctor of Traditional Chinese Medicine, registered in BC under the jurisdiction of the CTCMA of BC. I am writing you now regarding the lack of acupuncture coverage under Sun Life’s extended health care plan for federal employees.

Mr. Tutt R.Ac. shared with me your letter (dated April 18th, 2019) regarding acupuncture coverage for your members as provided by an RAc., TCM.P., and Dr. of TCM.

I have been actively engaged in resolving the situation, extant since 2012, in which federal employees receive no coverage for acupuncture provided by Registered Practitioners of Traditional Chinese Medicine and Acupuncturists. As a board member of the ATCMA in 2002 and 2010-2012, I have been deeply involved in this and related issues for nearly two decades, and have attached, for your records, recent pertinent correspondence with the Minister of Health and my local Member of Parliament.

Our members, regulated by the College of Traditional Chinese Medicine, and having dedicated years of full-time education to traditional and modern applications of acupuncture, are without question are most highly trained, skilled, and effective in the application of acupuncture.

Sun Life, however, covers acupuncture only when provided by medical doctors and physiotherapists, but not when provided by CTCMA registrants. As a member of a registered medical profession, the logic of this is lost on me. And, as the attached documentation shows, acupuncture delivered by trained acupuncturists is safer, less painful, and more effective than needling techniques delivered by professions that perform it sporadically or as an adjunct to other treatments.

I live and work in Esquimalt, B.C where many of my patients and potential patients are employed by the navy and the federal government in general, with extended health plans administered by Sun Life. That my services are not appropriately covered by this discriminatory policy affects my livelihood and the wellbeing of my young family, but it affects none more so than the members of the Public Service Alliance who deserve the best possible care.

The following scenario is one that I have faced many times with patients in my community.

Over time, I have seen several members of the submarine crew, all of whom have been forced to leave my care, despite the benefits they felt, due to a lack of insurance coverage for their treatments (I am happy to provide clinical records). The patient I describe here injured his back while lifting a heavy plank on the job and came to my clinic in acute pain and with severe muscle spasms, unable to work. After just two sessions with much improvement and almost ready to return to his job, he was unable to pay from his own pocket more treatments from me. As his injury had not completely healed, the inflammation returned. Acute pain became chronic pain, and the patient was forced to go on disability leave for a full year. His case went to the WCB. With a reduced income, his hardship is now both physical and financial, as he is the sole breadwinner for his family. If he had coverage for acupuncture provided by a registered acupuncturist, there is every indication he would have returned to work within 3-6 weeks, and continued to improve.

As you can see from the above example, your members can benefit in many ways from acupuncture sessions provided by a qualified practitioner: greater health overall, faster recovery from work-related injuries, and reduced financial stress. Meanwhile, the employer (and government) benefit from a reduction in unnecessary expenditures over the long term.

I hope we can work together to create a policy that is beneficial to everyone concerned. 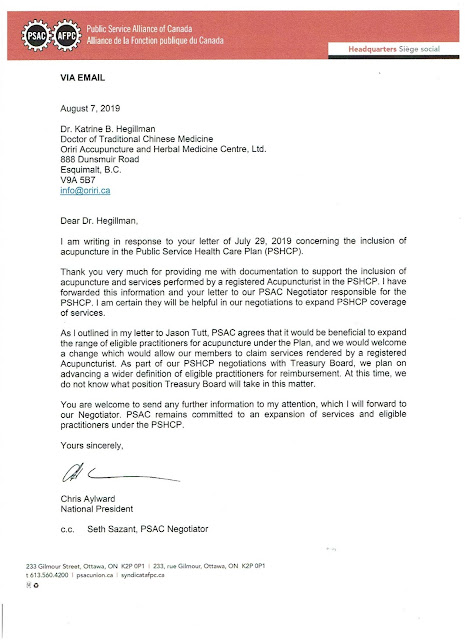 The Association: ATCMA informed me they are staying in touch with the PSAC and we are all hopeful their " bargaining process choices" will include our profession and this prejudice will be favorably solved soon.
In Solidarity!


Popular posts from this blog

Diagnosis and treatment for covid19 - from classic to front line.

March 18, 2020
TCM input in fight of Covid19 treatment in Chinese hospitals. I will continue to update this blog as the data will grow on this subject.  Below are different research papers and articles on the TCM Patients support in Covid19 disease collected form front line Wuhan hospital and other Chinese hospitals and teams of researchers. Please start by this artilce: Understanding of guidance for acupuncture and moxibustion interventions on COVID-19 (Second edition) issued by CAAM   Please watch Dr. John Chen video merging modern science with TCM research and application during the Pandemic in China and specifically Wuhan hospitals. How Coronavirus (COVID-19) is treated with TCM in China by Dr. John Chen, PharmD, PhD, OMD, LAc Here is my own summary of the Pathogenesis of Covid19 disease caused by SARS2nCOV19 (I hope you will enjoy my illustrations:) Here are different articles and research from different collegues that have been coming to me via e-mails and  social media. I
2 comments
Read more

March 18, 2020
Functional Medicine: offerings and suggestions in prevention of Covid19 disease. (For Traditional Chinese Medicine approach please see my previous blog). Originally this blog was to look at all the similarities between the Functional and Eastern Medicine. However, since the recent pandemic of covid-19, I decided to start, to focus on what is in front of us. Please watch video by IFM MDs who put together fantastic presentation explaining immunology, virology, preventative medicine and modifyable life style factors in Covid19: Functional Medicine approach to Covid19 IFM material explains that: "A coronavirus such as SARS-CoV-2 can be deadly because of its ability to stimulate a part of the innate immune response called the inflammasome, which can cause uncontrolled release of pro-inflammatory cytokines, leading to cytokine storm and severe, sometimes irreversible, damage to respiratory epithelium.[2]   The "cytokine storm, happens only in some infected individu
Read more